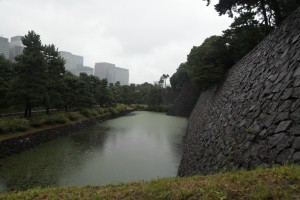 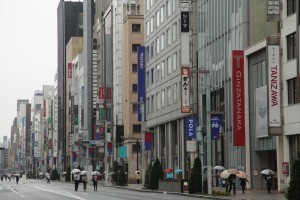 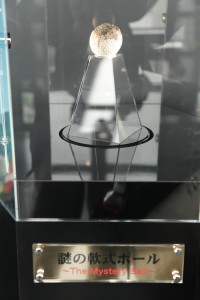 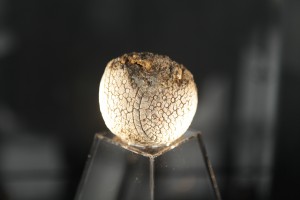 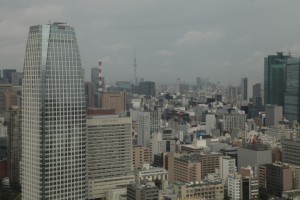 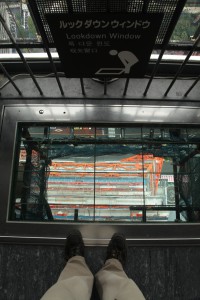 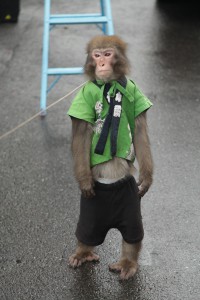 Pachinko is Japan unique cultural amusement, it says here on this sign in Akihabara. 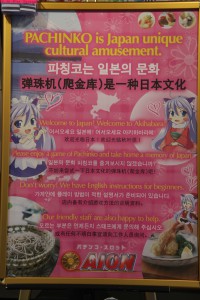 But that’s clearly for the tourists. For the real experience, I went to Shinjuku.

First I went walking around Shinjuku a bit. It was late afternoon, so things seemed a bit more lively than when I was here yesterday morning. The PA system was blasting out a boogie-woogie by a female singer where the only words I could understand were “boogie-woogie” and “Shinjuku.” When it finished, there would be a short announcement of some sort and it would start over again. I probably heard it at least eight times. 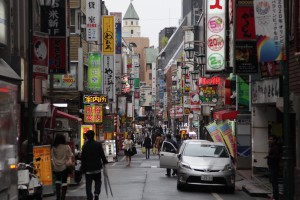 I went down one street I hadn’t seen before. It looked like it might have pachinko parlors. And it did, but as soon as I’d gone about half a block, I noticed that people were looking at me. Not menacingly, but furtively. One guy walked by me and said “six” as he passed. A little ways farther, another guy did the same. “Six what?” I thought.

Well, maybe I’ll try that pachinko parlor back by the station. 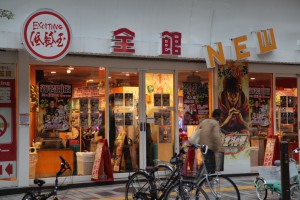 The guy at the door knew a few words of English and showed me what to do. What you do is basically this: Hold onto a dial. That’s it. Of course, you drop a coin in at the beginning, but after that, you hold the dial that controls how hard the little steel balls are shot into the mechanism. You don’t change this, you just pick a good level and hold it there.

Pachinko looks like pinball on its side. You shoot balls in at the top, and they bounce down among a bunch of pins. If they land in a narrow opening, you get points.

In the middle of this is a video screen with cartoon characters moving around and saying things in Japanese. I had a bunch of sea creatures with different point values, and a bikini girl who kept telling me how well I was doing. Arcade music blared at the same time and got faster whenever I was winning.

Every machine in the parlor had some variation on that theme and they were all blaring at the same time.

There was a non-smoking section, but this wasn’t it. And it was stiflingly hot. So I sat there in the heat and the visible cigarette haze and deafening music, holding the dial so that the balls shot to just the right point, as determined by sheer guesswork, and wishing that the balls would run out so I could leave.

At that point I started winning.

Not a lot, because each ball is worth 1 yen. But the balls kept coming out, and they filled up one tray and bikini girl told me I was lucky and that I had a “bonus get” so even more balls came out.

Eventually, the odds caught up with me and the balls stopped, but I still had a tray full to cash in.

Now, gambling for money is illegal in Japan, but gambling for prizes is not. So you take your tray of balls to a counter in back, where they count them and give you a receipt and you exchange the receipt for prizes that add up to that dollar amount. You can then take the prizes to an ostensibly separate establishment that will give you cash for your prizes.

I cashed in my tray of balls for a box of cookies, a box of chocolate, two cans of beer, and two pieces of candy. And then I realized that I had no idea where to cash this in. They weren’t going to tell me, because they had to keep up the charade that they were separate establishments. I wandered around the area looking for a while, but there was nothing obvious.

So basically I got some groceries I didn’t want in the most inefficient way possible. 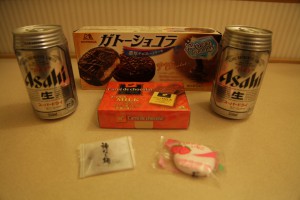 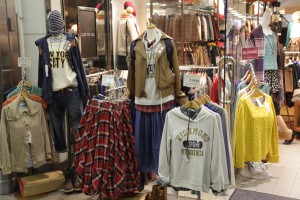 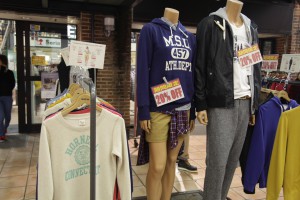 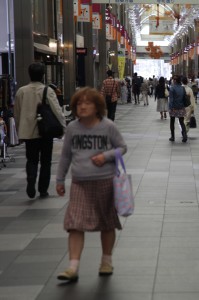 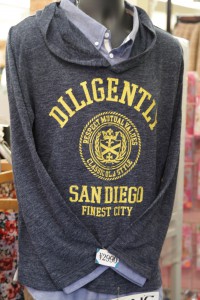 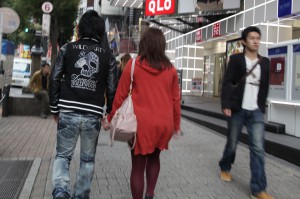 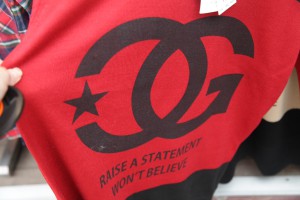 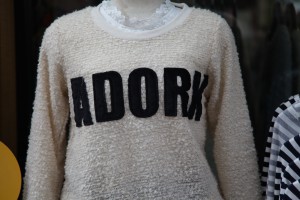 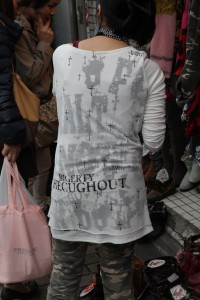 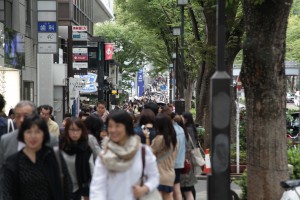 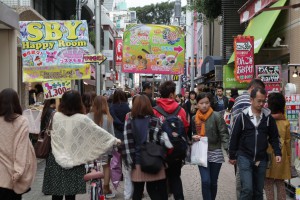 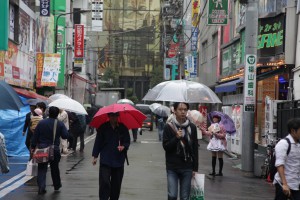 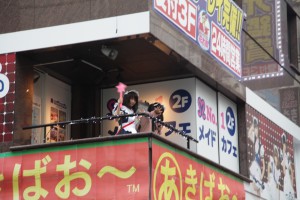 Early morning. I have a cold. I took some Japanese decongestant and I’m undercaffeinated. My feet hurt. It’s starting to rain. What should I do today?

How about wander through the alleys of Shinjuku in the morning drizzle?

A triple latte made me a little less groggy, so I didn’t even get lost all that much.

The Golden Gai in Shinjuku looks like this. It had a definite Nasty Vomit Sauce vibe, but everything’s closed in the morning, so there’s no way to check. 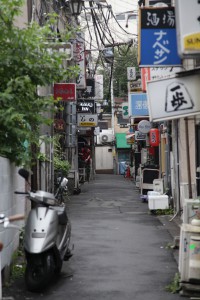 Next I went to Akihabara. I had a hankering for Freshness Burger* and figured I could have lunch and check camera prices in the duty-free shops.

Akihabara is “Electric Town”. It grew out of the black market in surplus military electronics that went on under the train tracks after World War 2. That portion is still there—although it’s legit now—and sells all sorts of electronic components and related items as the trains rumble overhead. 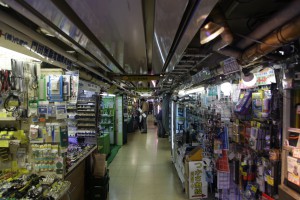 If you’re more than about 5′ 10″ you’ll bump your head. There’s even a second story in there. 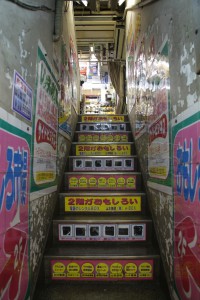 The rest of the area is a more standard jumble of computer/camera/stereo/DVD/you-name-it businesses. 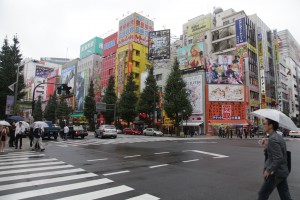 The cameras I looked at all had the same prices as on Amazon. I would have saved on taxes and shipping, but that’s it.

And there’s no Freshness Burger there, so I went back to Shinjuku. I knew I’d seen one there. I had lunch and listened to two Japanese girls speak French to each other, then went back to the hotel to take a nap. 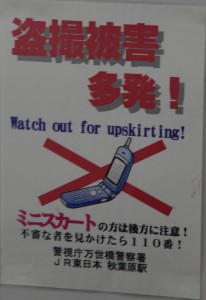 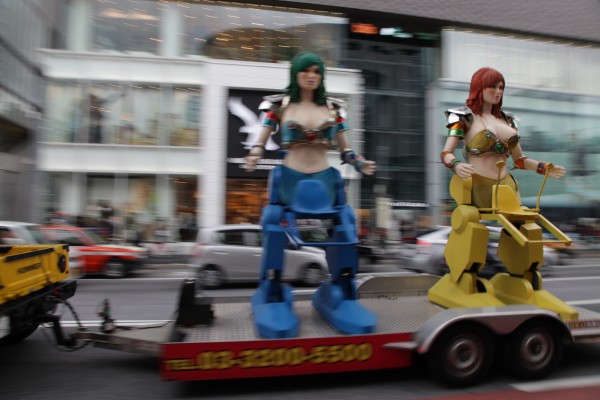 About 20 years ago, a friend visited Tokyo and told me of something called “nasty vomit sauce” at some dive down an alley in Shinjuku. I tried to find it today while I was stranded in Shinjuku.

But they just bowed and acted embarrassed and rushed away.

“Iidesuyone!” I called after them, but I guess they all had a train to catch or something.

Imagine greater Los Angeles. At 4850 square miles, it has about 13,000,000 people. Now increase the size slightly, to 5240 square miles. Then nearly triple the population, to 36,000,000. Make most of the roads too narrow to drive on and put a giant, confusing train system in the middle of it. Add vast amounts of neon signs and video screens and one emperor.

Now try to find your way around.

I couldn’t find a place to stay in Tokyo proper, at least not for a reasonable price, so I’m staying in Saitama, a little north of Tokyo. Getting here is straightforward. You just take the Saikyo line to Todakoen station. You have to make sure you get on a local or a rapid express, not a super rapid express, because that one bypasses Todakoen. Otherwise, no problem.

But if you’re going the other direction, the line stops at Shinjuku. If you’re foolish enough to stay on the train, thinking it will continue to Shibuya, well…it won’t. It now goes in the other direction, back toward Todakoen. To continue toward Shibuya, you have to get off and take a train on the Rinkai line, which is the same exact line. It’s just called something else in this direction.

So that was a good chunk of my afternoon.

I finally got to Shibuya, but all I did was get a triple latte at the Starbucks that overlooks Shibuya crossing and watch the people go back and forth across the street. A fair percentage of them were just crossing the street to try to get pictures of everyone else crossing the street.

At the starting gate, just as the light turns… 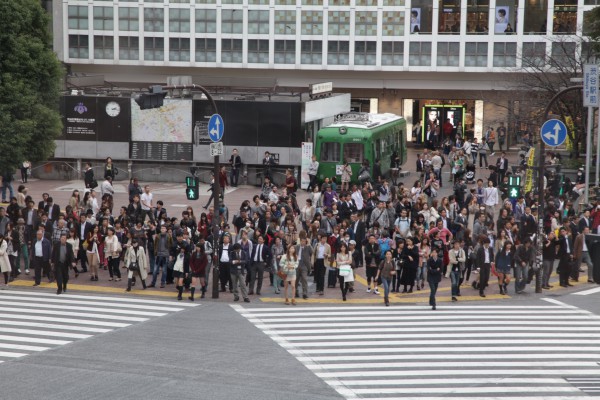 Tonight I’m just going to stay in and read a William Gibson novel.