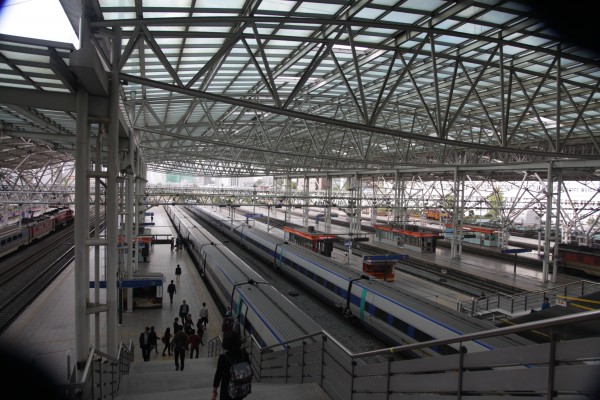 Coffine Gurunaru wants to be a tree and a ferry in a river just like a place to rest. A good quality of coffee and the health benefits of wine will definitely make your body and your mind upgraded and even your pride in your life. Please take a deserved break at Coffine Gurunaru. Coffine Gurunaru is a resting place for you. 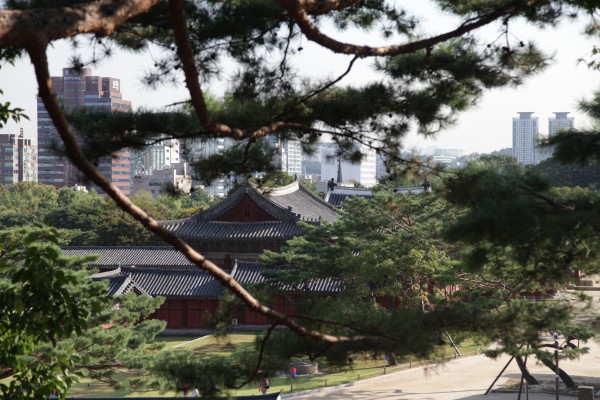 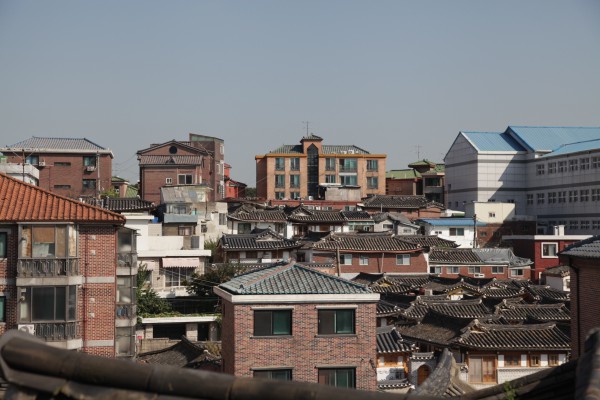 This is National Treasure No. 2. 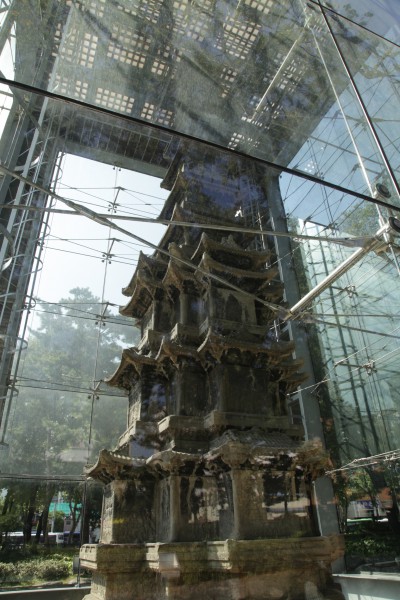 I spent a little time in the history museum, then walked back to Tapgol Park and saw National Treasure No. 2. Then I walked through Insadong to Bukchon Hanok Village, which is an area of older traditional houses that weren’t torn down when every other part of the city was modernizing. Now they’re in a sort of ritzy area and surrounded by art galleries. It’s kind of like Lombard Street in San Francisco, in that the residents constantly have throngs of tourists milling about in front of their houses taking pictures. Which is, of course, exactly what I did.

My feet and calves were sharply rebuking me by this time (especially since Bukchon Hanok Village is a very hilly area), but they are not the boss of me, so I went to Changdeok Palace, which is the only one of the palaces that’s a UNESCO world heritage site. UNESCO knows their stuff, palace-wise, I’m given to understand, but you can only see it with a tour, and I had missed the last English tour for the day.

So I stumbled next door to Changgyeong Palace, which doesn’t require a tour. It’s not as big as Gyeongbok Palace, but it’s in a much nicer park-like setting.

Then I went to Bong House and took a nap before going out for galbi.

I walked a total of about 20 miles over the course of the day.

After the markets, I intended to make my way back to Insadong, but took a wrong turn somewhere and got solidly lost for about an hour. I’m still not sure where I was. At one point I was crossing some railroad tracks that were nowhere on my map. Eventually I was able to orient myself to the N-Seoul Tower, and when I stumbled across the History Museum, I could find my place on the map.

Note: The Rough Guide to Korea does not have very good maps. 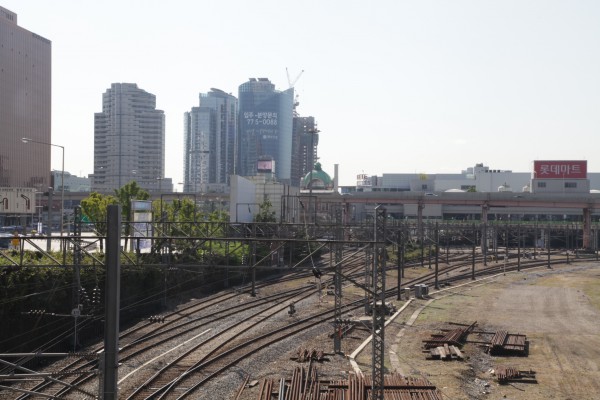 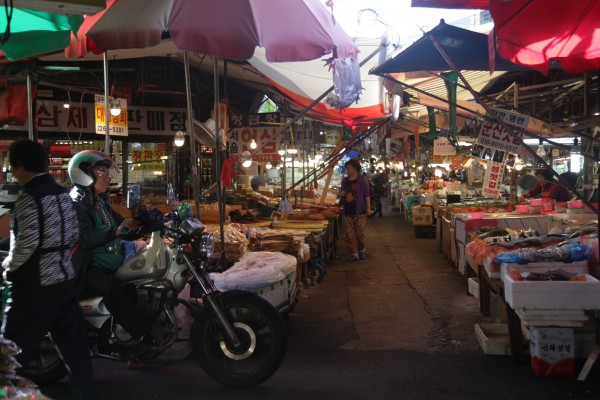 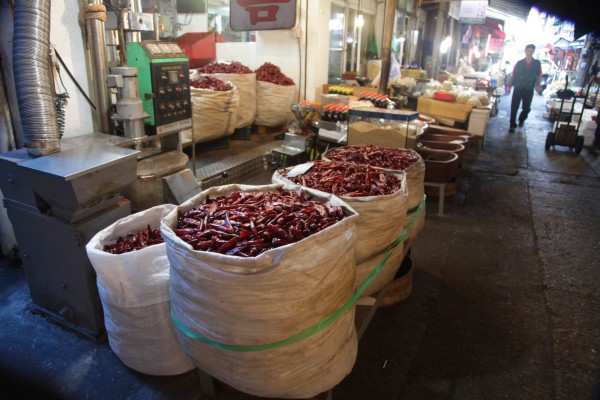 After about four hours sleep, I took a shower and dragged my jet-laggy self out to Starbucks for a triple latte. I stopped at Tapgol Park to see National Treasure No. 2, but the park wasn’t open yet, so I walked through Insadong, trying to avoid the umbrellas. The rain was no more than a light drizzle, but nearly everyone had an umbrella, and walking down the street means that you’re constantly at risk of being skewered by an umbrella rib.

I stopped by a very flower-intensive Buddhist temple with amplified chanting emanating from it. It had large golden Buddhas and left-pointing swastikas and topiaries shaped like elephants. There was a vending machine that sold American and Japanese drinks.

After that I’m not sure where I went. I wandered through side streets and alleys, then went up a hill that got progressively steeper. There were more traditional hanok buildings as well as fancier modern buildings, with a lot of art galleries and European-themed restaurants. (French bakeries seem popular.) The streets were lined with pine trees. The whole area looked like a combination of Carmel, Montmarte, and San Francisco’s Chinatown.

Down the hill on the other side, I went through more alleys and encountered a group of teenagers who said, in decent English, that they were part of some mission and one of their tasks was to take a picture with a foreigner, and could they take a picture with me? So somehow they knew I was a foreigner. One of them took a picture of us on his iPhone and they went on their way, shouting “I love Korea” as they went.

I continued down the hill, stopping at one point to get out of the way of two fire trucks that arrived to put out a fire in a shop. It was already out at that point, but smoke was still billowing out of the windows. Patrons at the restaurant next door were fanning away the smoke, but otherwise continuing with their meals.

Total walking distance was a little over nine miles. 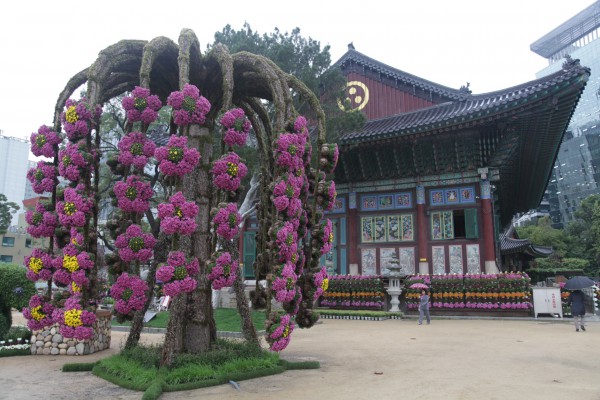 Joseon architecture from 1412. Sort of the Longaberger Basket building of its day. 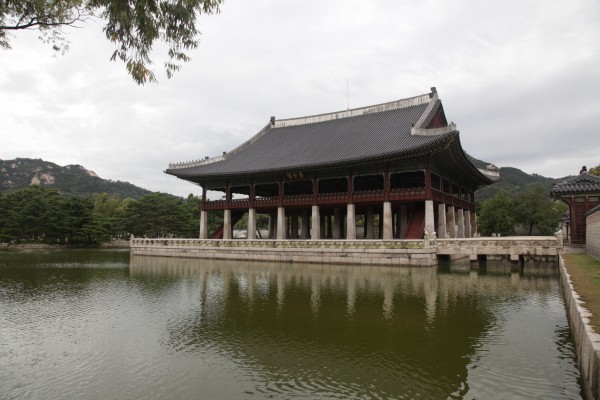