To save time, I went back to Kumamoto and north from there, rather than head over to the east coast of Kyushu and then north. I missed the first express train from Aso and the next one wouldn’t be for another 3 1/2 hours, so I took a local, which stopped at every station, parking lot, bike rack, and cow pasture on the way down the mountain. And all trains on this line have to stop twice to reverse direction. The edge of the caldera is so steep that they have to zig-zag.

I got to Kumamoto at noon, less than half an hour before catching the shinkansen to Shin-Osaka*, so no time for lunch. And I didn’t have breakfast, either. Just vending machine coffee, which is much better than you would expect. One brand is called “The Coffee.” It says:

“The Coffee” is authentic coffee with its special roasting and blending.

I missed the snack lady the first time she came by with the cart, and she didn’t come by again until after we’d left Shin-Yamaguchi. I got beef jerky, matcha ice cream, and Pocari Sweat ion water, whatever the hell that is. Cost almost ¥1000. Not much of a lunch, but it beats vending machine coffee.

There’s supposed to be a shinkansen from Osaka to Kyoto, but I couldn’t find it, so I took a regular express. The cities are practically right next to each other, so it was good enough.

It was clear and sunny in Kyushu. It’s raining in Kyoto. I may have to buy an umbrella.

* The shinkansen stations have “Shin” in front of them, to distinguish them from the regular stations with the older tracks. A few, like Kumamoto, are combined.

The caldera, with its seven peaks. 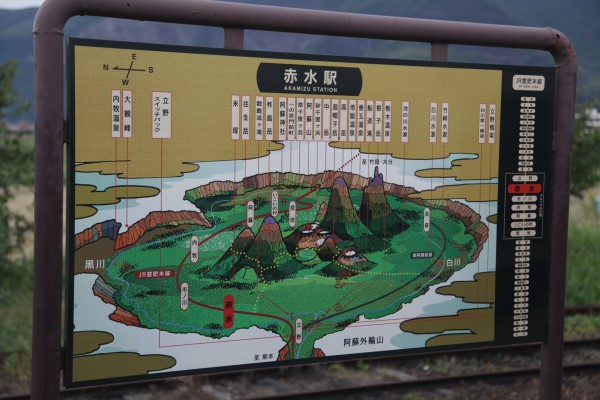 I tried to buy a small piece of sulfur for ¥100 and the guy held up a sign that said “could not take on plane.” It had Korean and Mandarin translations as well. So Japan seems to have some sort of no-sulfur airplane rule. 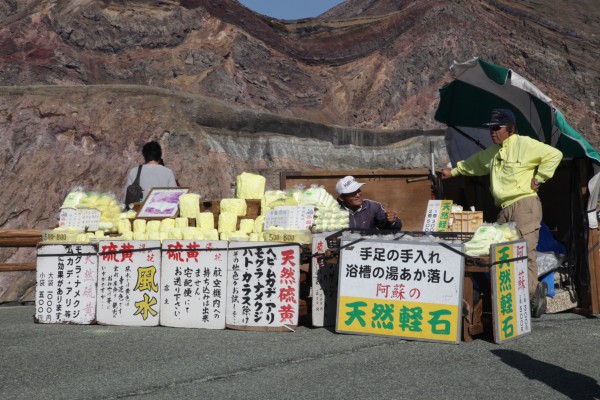 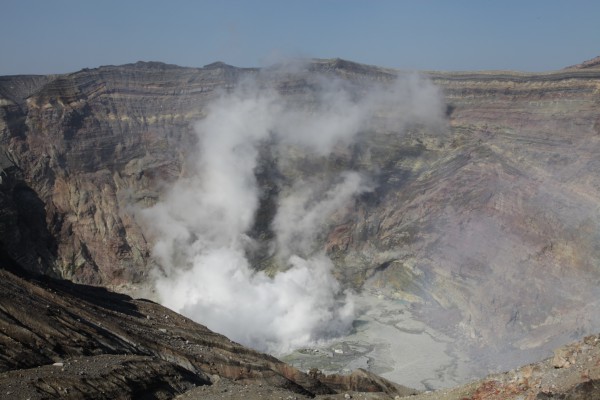 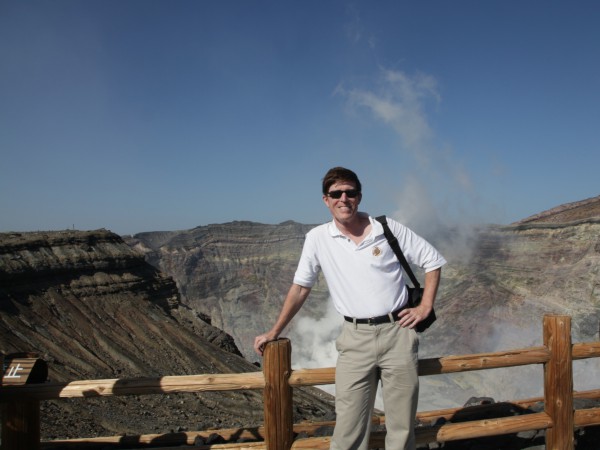 My respiratory organs were fine, so I went ahead. 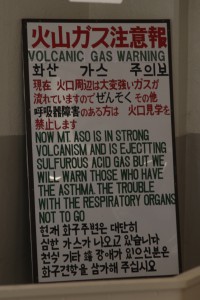 Mt. Aso is a collection of small towns built around growing rice and raising cattle. They’re quiet farm communities, and they’re built entirely inside the caldera of a giant volcano. Within that caldera are seven peaks, six of which are dormant. The seventh one—Nakadake—spews sulfur gas continuously, and once in a while it explodes, most recently in 1979.

This being Japan, it’s a tourist attraction, with a cable car (“ropeway”) going right up to it.*

I left my bag at the nearby hostel that the guidebook recommended, had some lunch, and took the bus up the mountain. I only had enough money for a one-way ride on the ropeway, so I opted for up. Walking down looked easy enough. (The ropeway is a four-minute ride.)

There isn’t really anything to do once you’re up there other than take pictures and smell the sulfur and maybe buy a piece of sulfur as a souvenir. So I took some pictures and walked back down to the gift shop to wait for the bus.

And now I’m back at the hostel, which may be the single cleanest and most well-appointed place I’ve ever stayed. It looks like it was built yesterday. It’s tempting to stay an extra night, just to marvel at how nice it is, but I have to see if I can get to Kyoto by tomorrow night.

* That also sounds like something New Zealand would do, except that they would put a zip line over it too.

I caught the Aso Boy! Kuro to Mt. Aso (mascot: a small cartoon dog). It wasn’t the train I thought I was getting on, but it went to the right place, if not as quickly.

It’s a family sightseeing train and was mostly packed (apparently this is a national holiday), but the last car had a bench with a desk in front of a panoramic window. It wasn’t nearly as crowded.

It was only later that I found out that I was supposed to have a reservation for that train, but no one ever checked. It’s also another ¥200 to sit where I was sitting. 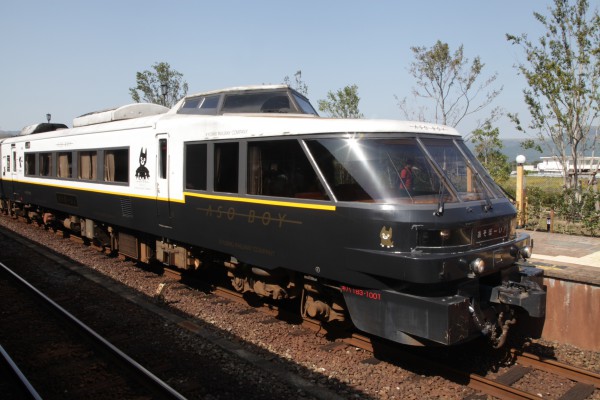