I went to Sonoma for the 4th of July again this year, as is my custom whenever I’m not in rehab.

The parade lived up to expectations, with a wine trolley, various cars, a hot-air balloon with no balloon, people dressed as blueberries, and an assortment of rocket and moon themes in an apparent nod to the 50th anniversary of Apollo 11.

Later, there was food, genealogy, miniature golf, and chickens. The tri-tip caught on fire, but it was still good. I remain unconvinced of the value of diaper rash ointment as a treatment for sunburns.

Fourth of July in Sonoma. I received a warm welcome. 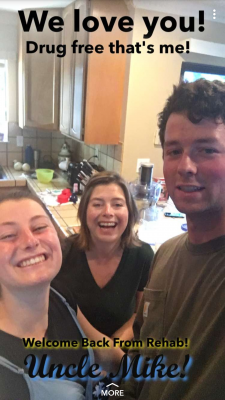 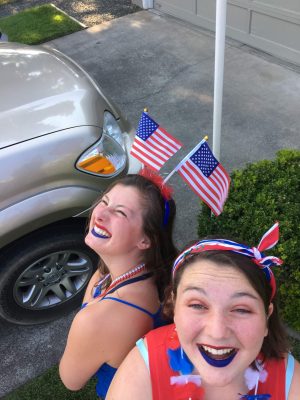 Others preferred a more traditional form of celebration. 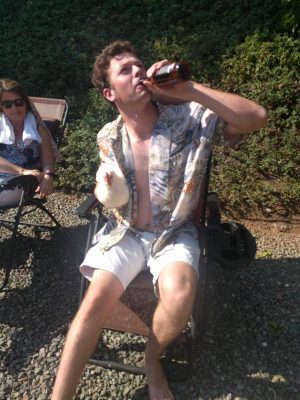 In the evening, some of us watched the fireworks from a field adjacent to a cow pasture. A nearby group of people sang such holiday favorites as the national anthem, God Bless America, one or two Irish folk songs, and Part of Your World from The Little Mermaid. There may have been some wine involved. There was also a dog with a glow-stick collar who barked at the fireworks.

Last night we walked about a mile to a church across the street from a park where there was supposedly a fireworks show every year. It was empty. A couple of women were passing by and Alcalde asked them about it. “Oh, they haven’t had that here in years.”

All was not lost, though. We could see another show several miles down the road, as well as occasional fireworks shooting up over the trees from somewhere closer. The latter became more professional-looking as it went along, so we had two shows going. We stood in the intersection drinking beer and watched them both. We could hear a third show somewhere, but couldn’t see it.

It sounds like there used to be fireworks in the park long ago, so Alcalde isn’t completely delusional, but I figure he’s just been standing in that intersection for the last several years, if he’s been going out at all.

I took the hydrofoil to Macau first thing in the morning on December 31. Macau is a former Portuguese colony that’s mostly turned into Las Vegas. The center of town still looks like the old colony, though, with forts and churches and densely packed, beat-up-looking buildings.

The focal point is St. Paul’s cathedral, which burned down in 1835, leaving only the facade. 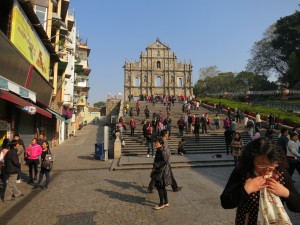 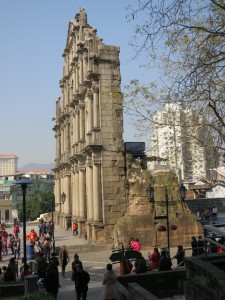 So I got through that pretty quickly.

Adjacent to the church is the main fort of Macau. They’ve put a history museum in the center of it, which is mostly underground. 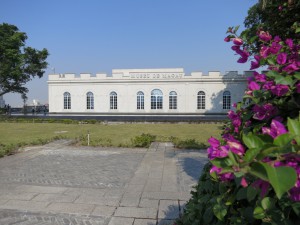 It’s not really a large museum, but it’s nicely done. It covers the early history of China and Portugal, done in parallel, until they converge in the 15th century. Most of the displays are commerce-related, since Macau was concerned mainly with trade and fighting off the Dutch.

The fort is, not surprisingly, on a hill, and has views of the city in all directions through the embrasures. 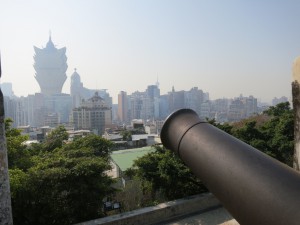 In the center distance, you can see the tip of the Macau Tower, which was modeled after the one in Auckland. I didn’t jump off of it, though, because no one was paying me.

That big flared building at the left is the Grand Lisboa, one of Stanley Ho’s properties. For many years, Stanley Ho was the only casino owner in the territory. Then other casinos started coming to Macau, and he had to start scrambling to compete. Buildings shaped like giant pineapples seem to be a part of that. 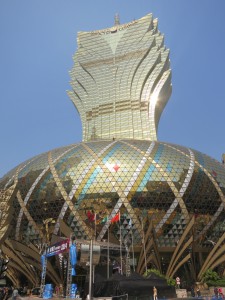 In front of St. Paul’s were several people handing out bright orange bags. The bags said “Jesus loves you,” plus a whole bunch of other stuff in Cantonese. It was getting hot, so I got one to put my sweatshirt in. There were also some pamphlets, but they were in Cantonese too.

Down the hill from the fort and the church facade is a tourist street that seems to get  more densely packed as you walk down it, like you’re being squeezed through a funnel. 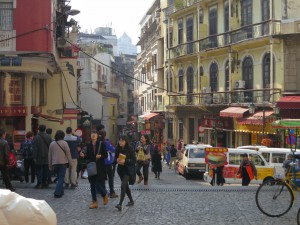 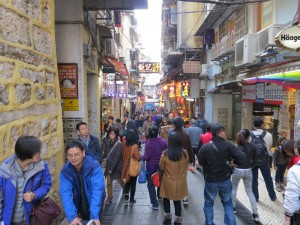 At the bottom of the hill is a plaza with another church. There are a lot of churches in the center of town, and most of them are yellow. 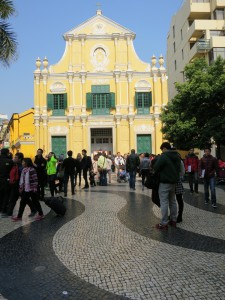 The nicer parts of town were like this: European-style buildings around small plazas. 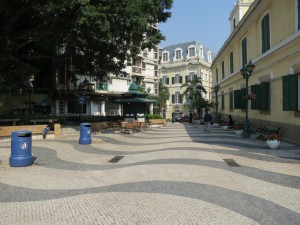 Other parts were less nice. 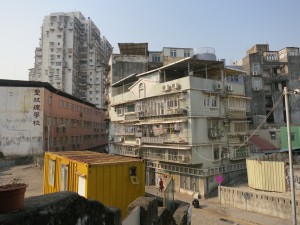 I got lunch at a restaurant that my guide book recommended as a good place to get Macanese food. As it turns out, it was a Portuguese restaurant. The guide book also spelled the name wrong. It was good, though.

I spent another hour or two wandering around with my Jesus Loves You bag, then caught the bus back to the hydrofoil. The hydrofoil trip was uneventful, but I hadn’t considered how many people would be coming into Hong Kong for New Year’s Eve. Pscrillions, that’s how many. It took me an hour and a half to get through immigration.

Oddly, the act of going through immigration again reset the duration of my stay. An American can stay for three months as a visitor, but going to Macau for a day restarts the three months. I wonder how many times you can get away with doing that.

Having spent most of the day standing and walking, I wasn’t very enthusiastic about staying up until midnight to watch the fireworks. I went to bed at 8:30.