After the Reichstag, I came back to the hotel and lounged around for a while. I didn’t really plan to go anywhere except KaDeWe in the late afternoon, but I got tired of lounging, so I went to Potsdamer Platz, which is on the way to KaDeWe.

Potsdamer Platz was right on the junction of the American, British, and Russian sectors, so the Wall ran right through it. There were some apartments and businesses overlooking the Wall (such as the studio where David Bowie and Iggy Pop recorded), but much of the area had been destroyed in the war and not rebuilt, or cleared away to form the no-man’s land between east and west. Most of what’s there now is less than 20 years old.

The location of the Wall is marked by a double row of bricks in the pavement. 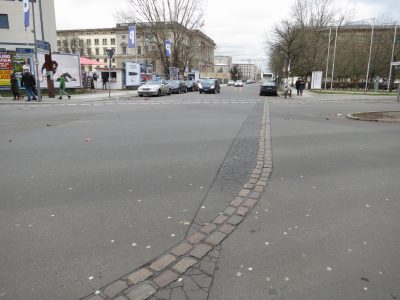 The Wall: Much Shorter Now

I didn’t realize this until I got there, but down a side street is the last remaining BT 6 Watchtower of the DDR, just standing there on the sidewalk.

And this being December, it has a Santa hat. 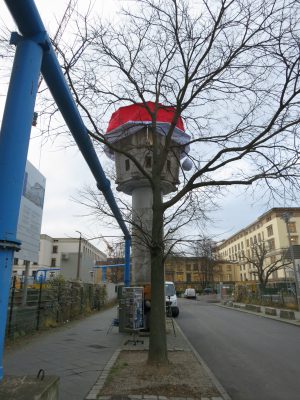 The tower is a city monument, but it doesn’t receive any money. It’s run entirely by volunteers. Today it was staffed by a friendly woman named Susi who had worked in the Potsdamer Platz area in the mid-’80s and could see this tower from where she worked.

I climbed up in and looked around. Visibility is good, but there’s not a lot of space up there. 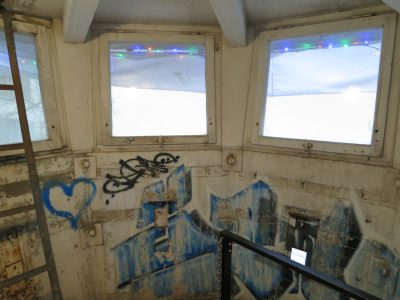 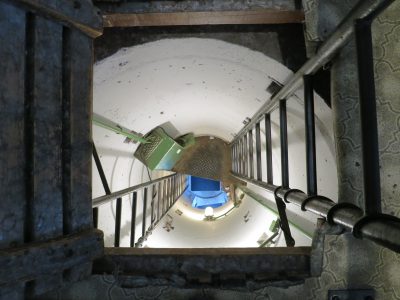 View Down the Base of the Tower

After the tower, I took the train to Wittenbergplatz and walked down Tauentzienstraße until I got too cold. By then it was time for an early dinner at the Wintergarten buffet on the top floor of KaDeWe. This is the most spectacular buffet I’ve ever seen. I recommend the Apfelstrudel. 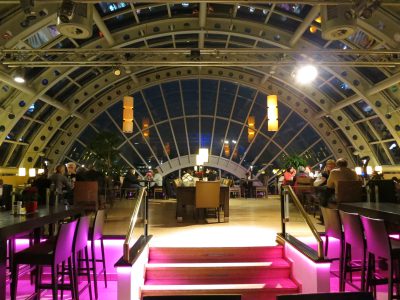 Now I need to pack. My train leaves Berlin tomorrow at 0630.