My foot and knee are still bothering me, and probably won’t recover until I stay off them for a while. So naturally today I walked almost eleven miles.

In the morning I went across the river to the East Side Gallery, which is a mile-long section of the Wall that was given over to artwork in 1990 and restored in 2009.

A lot of it is overtly political, not surprisingly, like this famous picture of Brezhnev and Honecker kissing, which until this trip I did not realize was based on photo and actual practice of communist heads of state.

Hard to imagine kissing Brezhnev. That’s the stuff of nightmares, that is. Not that Honecker would be a delight, but Brezhnev is somehow worse. 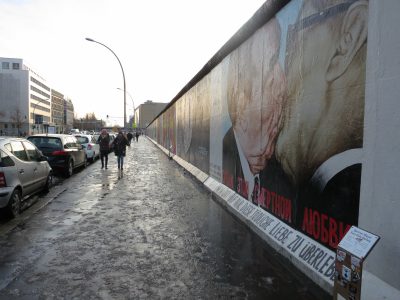 Some of the pieces are more fanciful. 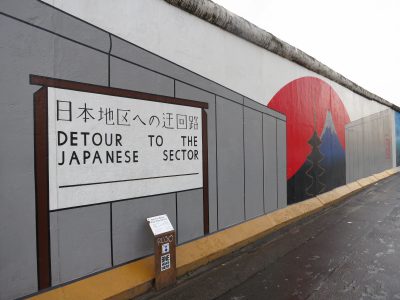 There are signs threatening prosecution for defacing the murals, but a lot of them have graffiti anyway, like this Pink Floyd piece. 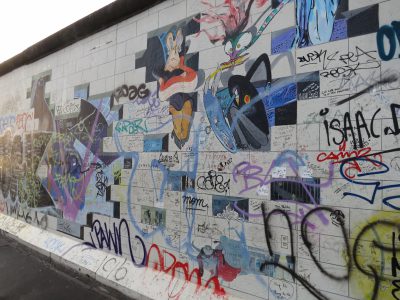 The Wall on the Wall

Of course the best is this one. Somewhere there’s a companion piece showing the other side, but I don’t know where it is. There are bits of the Wall all over the place. 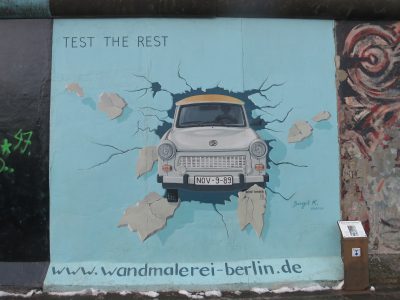 From there it was only a short hop on the U-Bahn to the Stasi museum, inside the old Stasi headquarters. There was a film crew there, so I wasn’t able to see Erich Mielke’s office, but I did snoop in some of the lesser offices when the film people weren’t paying attention. 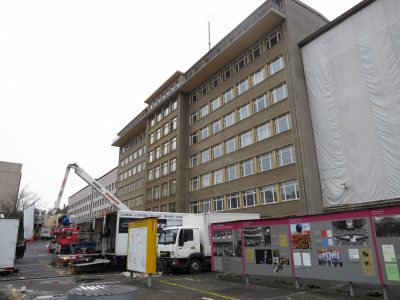 At its peak, the Stasi complex covered 54 acres, with 50 office buildings. 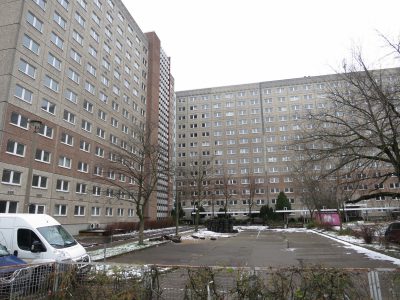 Then I walked over to Unter den Linden and bought another shirt. Then I walked to the Brandenburg Gate, where someone was assembling a giant menorah. 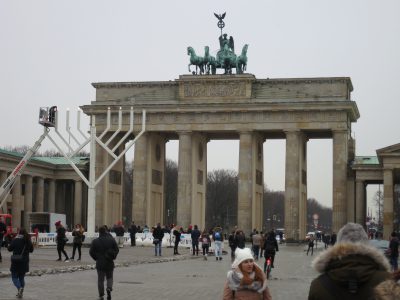 Menorah at the Brandenburg Gate

Then I walked up Unter den Linden. Initially I was identifying things in the guidebook as I went, but it was getting colder and I started walking faster and I left my guidebook, and my hands, in my pockets most of the time, so I don’t know what everything was along the way. 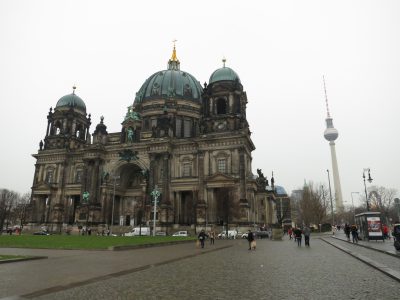 In all of the tourist areas, there are guys selling genuine East German and Soviet hats and pins and flags. Absolutely for-sure real stuff. 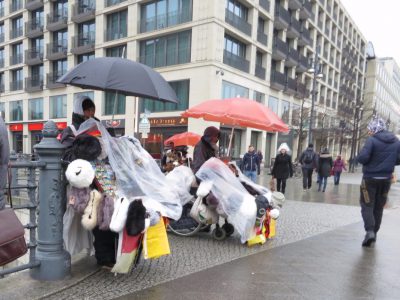 Some of the stores are even still selling pieces of the Wall. And in case you doubt them, they come with a certificate of authenticity. And certified authenticity is the most authentic authenticity.

After a brief stop at the hotel, I took the train to Kaufhaus des Westens, aka KaDeWe, the largest department store in continental Europe. All of it is impressive, but the food market is amazing. It’s an entire floor of cafes, delis, bakeries, candy stores, grocery stores, wine bars, and any other food-related thing you can think of. It is to an ordinary food court what West Berlin was to East Berlin. I think I spent close to an hour just wandering around on that floor. 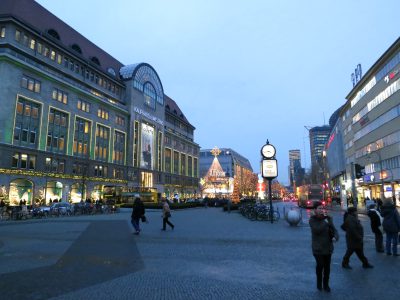 After I left KaDeWe, I got on the train going in the wrong direction. Could happen to anyone, really.

Eventually I made it back to Alexanderplatz and stopped in the Nikolaiviertel for a Feuerzangenbowle, as one does this time of year.

“Feuerzangenbowle,” it says here in Wikipedia, “is a traditional German alcoholic drink for which a rum-soaked sugarloaf is set on fire and drips into mulled wine. It is often part of a Christmas or New Year’s Eve tradition. The name translates literally to fire-tongs punch.” It’s a close relative to glühwein and thus to gløgg, but probably a bit stronger. 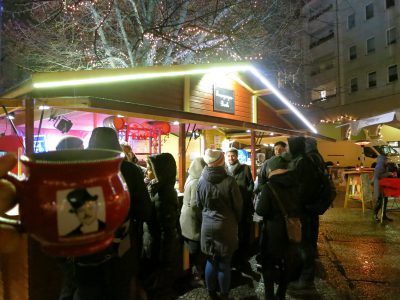 The venue selling this concoction was right next to the Nikolaikirche, a (mostly reconstructed) 13th-century church that is now a museum. They seem to be connected to it in some way. They sell this drink and a few others and have the 1944 movie Die Feuerzangenbowle running on a continuous loop. 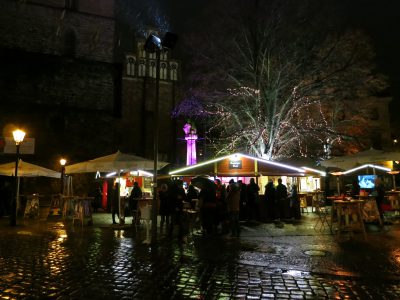 The Nikolaiviertel itself is supposedly the historical center of Berlin. The church is legitimate, even if it’s mostly a restoration, and some of the other buildings are authentic, too. They’re just not necessarily authentic from that particular location. And a lot of the others are idealized recreations.

All of this was put together by the East German government for Berlin’s 750th anniversary in 1987. It’s sort of a Germanic Main Street USA. 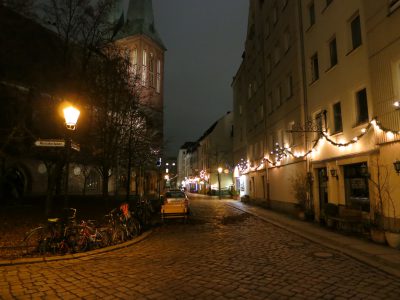