I googled Israel Wells and got this. I clicked on W001 Descendant Chart and got this. Scrolling up to the top takes you to Thomas Welles, who is apparently my 9G-grandfather.

UPDATE: The top level of the Wells DNA search is here, with many surnames. 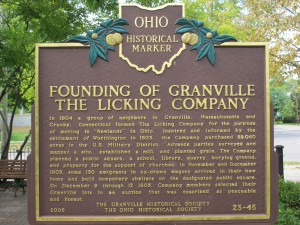 After the last of the reunion get-togethers, we drove out to Granville and wandered around downtown for a while. Granville was founded by various of my ancestors, and there’s a monument to that effect next to the Presbyterian church. 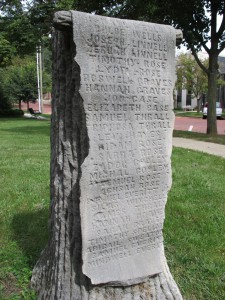 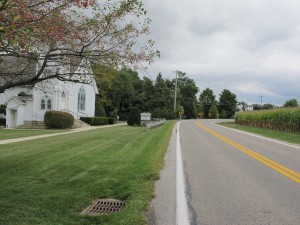 Formerly known as 4720 East Walnut Road, where my mom lived in the late ’40s and early ’50s. The driveway goes straight on where the road curves, to the right of the first arrow.

According to the woman who lives next door (barely visible near the arrow), a guy named Yokum owned both 4710 and 4720. He lived in 4710 and his parents lived in 4720. Later (presumably after his parents died), he moved into 4720, rebuilt and expanded it after a fire, and sold 4710 ($150,000 in 1986). Also, some of the contracting work was apparently a bit dodgy. She said that they’re in a pissing contest with their neighbors over the septic system.

Really, she said that.

The original ten acres looks like it’s been subdivided into five lots. 4710 is 3.9 acres; the rest are all smaller.