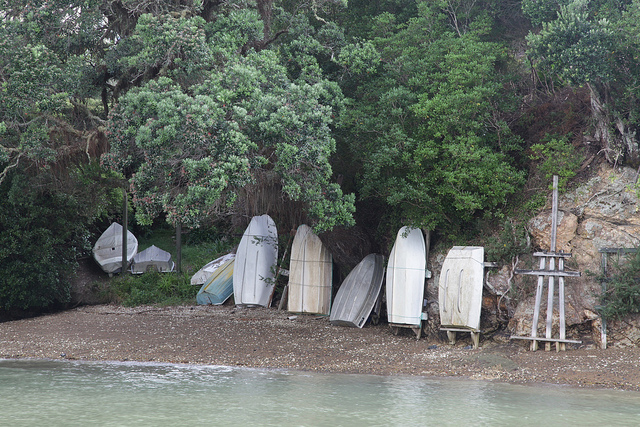 Before leaving Waitomo Caves I did a one-hour walk through a spectacular eroded cave structure called the Rukiura Bush Walk. The path goes through natural tunnels, along cliffs, and through thick ferny foliage.

On the way out of town I stopped at the Otorohanga Kiwi House to see the kiwis they have in captivity, including a rare Great Spotted Kiwi. The kiwi has no visible wings and a very unbirdlike lumbering gait, giving it a cartoonish quality. It’s a very weird bird.

All of which means that I didn’t really get going until 11:00. I made it as far as Russell, at the Bay of Islands, where I filled up at the oldest operating gas station in New Zealand (built in 1930) and had dinner by the bay. Russell has a Caribbean quality. It’s slow-paced, semi-tropical, and has British colonial architecture from the 19th century.

No time to stay, though. I need to be in Auckland tonight and I’m starting out by going in the opposite direction.